As an Amazon Associate, we earn from qualifying purchases.
33shares

We have an answer to that age-old question of What To Do With Leftover Ham!  With this list of leftover ham recipes, you’ll be able to use up that ham in a variety of ways, now and later.

While ham is a staple on many holiday menus, we argue that cooking a ham should be on your meal plan throughout the year. Ham is a great ingredient in a number of dishes from soups to casseroles. 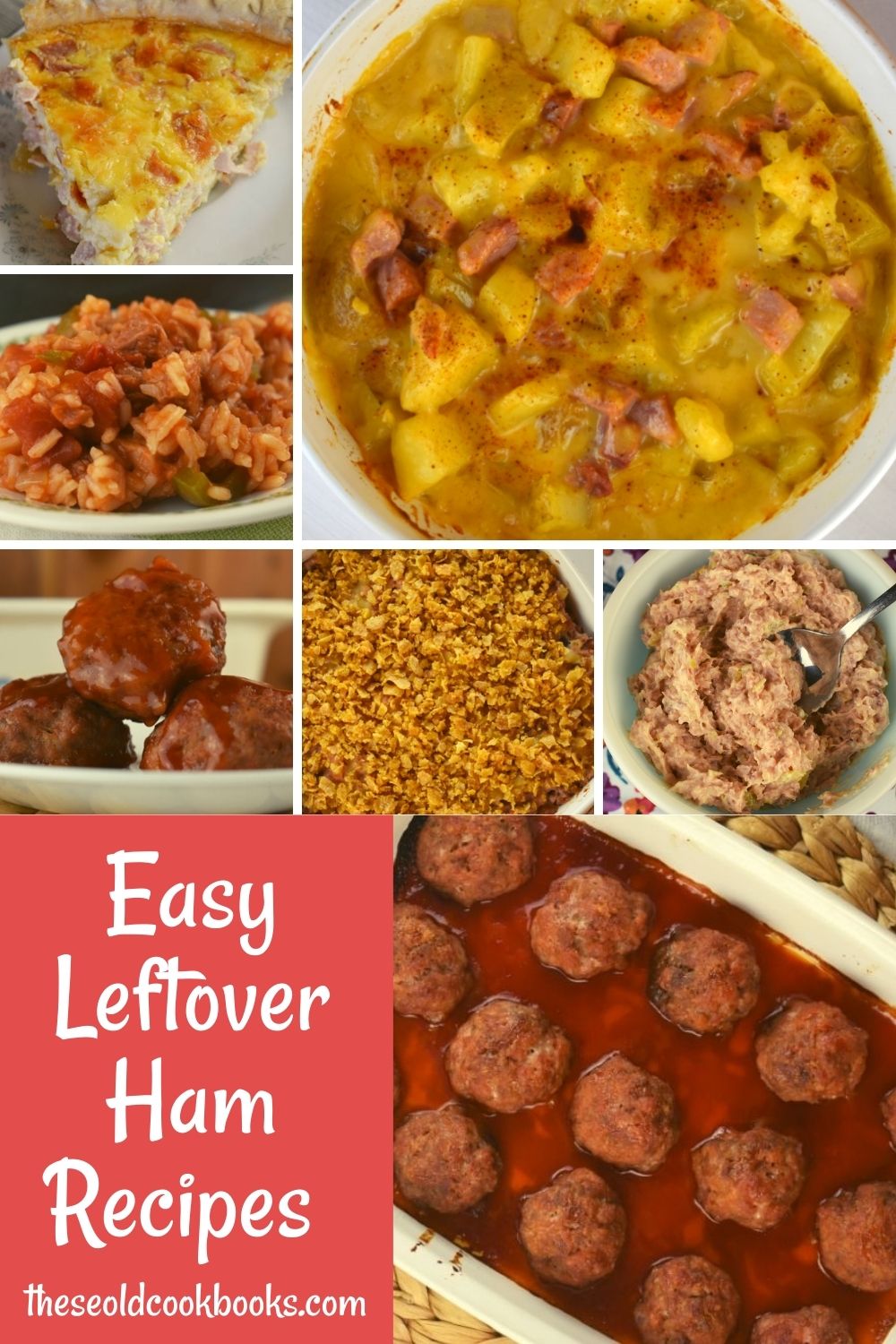 Ham is a staple on our holiday table no matter if it’s Easter, Thanksgiving or Christmas and often at birthdays in-between.  Over the years, we’ve compiled a collection of easy ham recipes. Each recipe is unique and fun, and every one has a “secret” ingredient. While cooking our ham in the oven works just fine, we love using our crock pot to fix our ham. Check out our favorite ham recipes below! 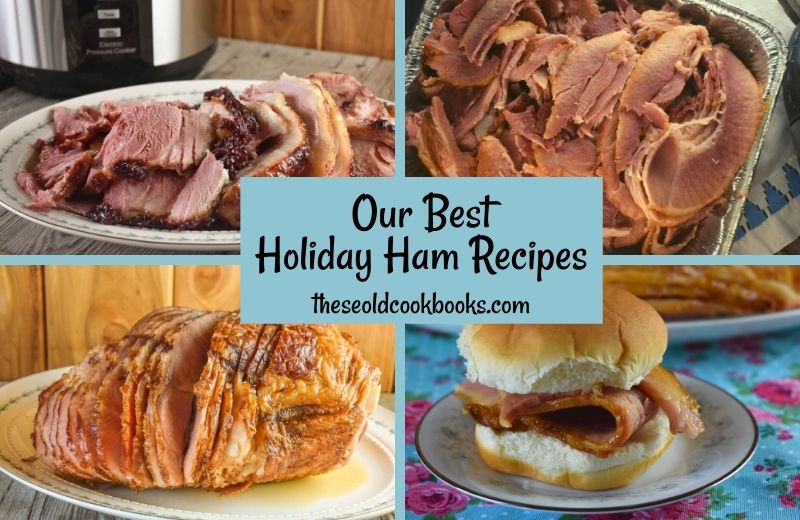 3 Ingredient Crock Pot Ham is by far the most popular ham recipe on our blog…and we can’t argue with that! 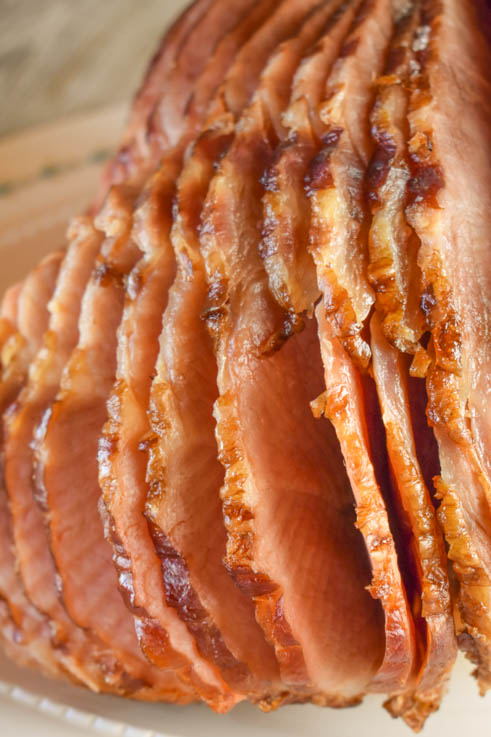 Brown Sugar Glazed Ham is a classic version of this holiday staple. Brown sugar is a very traditional ingredient in many ham glazes. 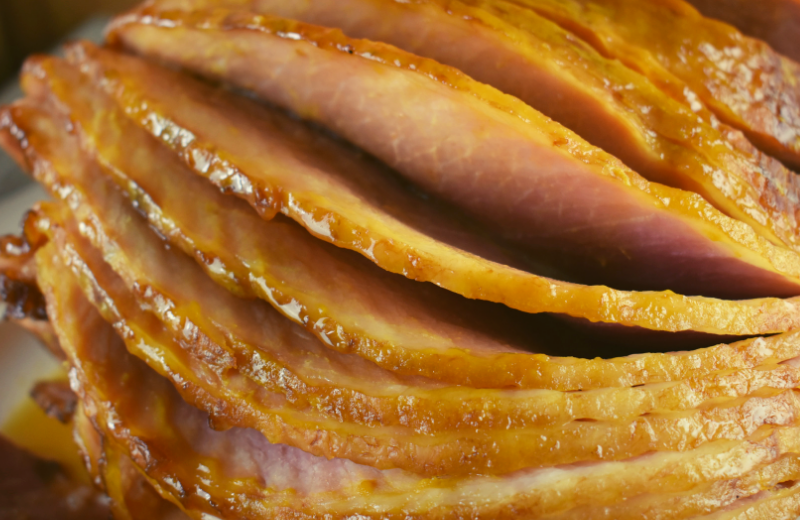 Ginger Ale Slow Cooker Ham uses a fizzy soda to give the meat a sweet, tangy flavor. So good! 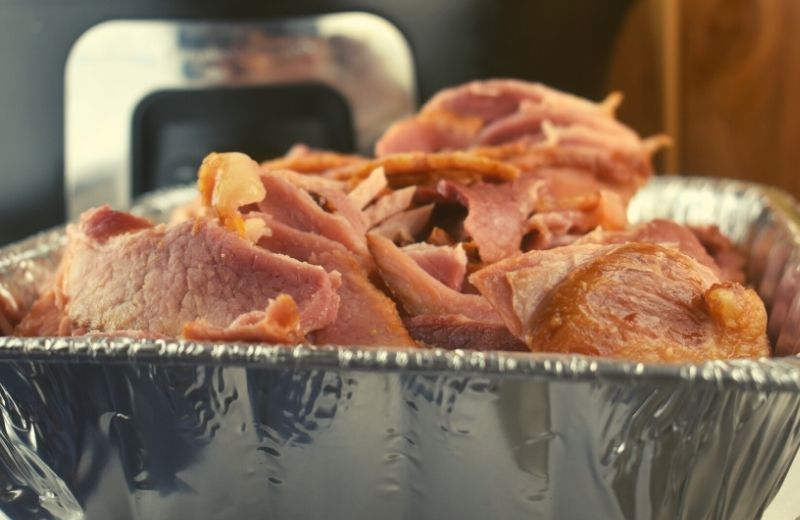 Cranberry Glazed Ham features a can of cranberry sauce and brown sugar for a delicious outer coating. While we feature the Instant Pot in this recipe, we also include directions on how to cook it in the oven! 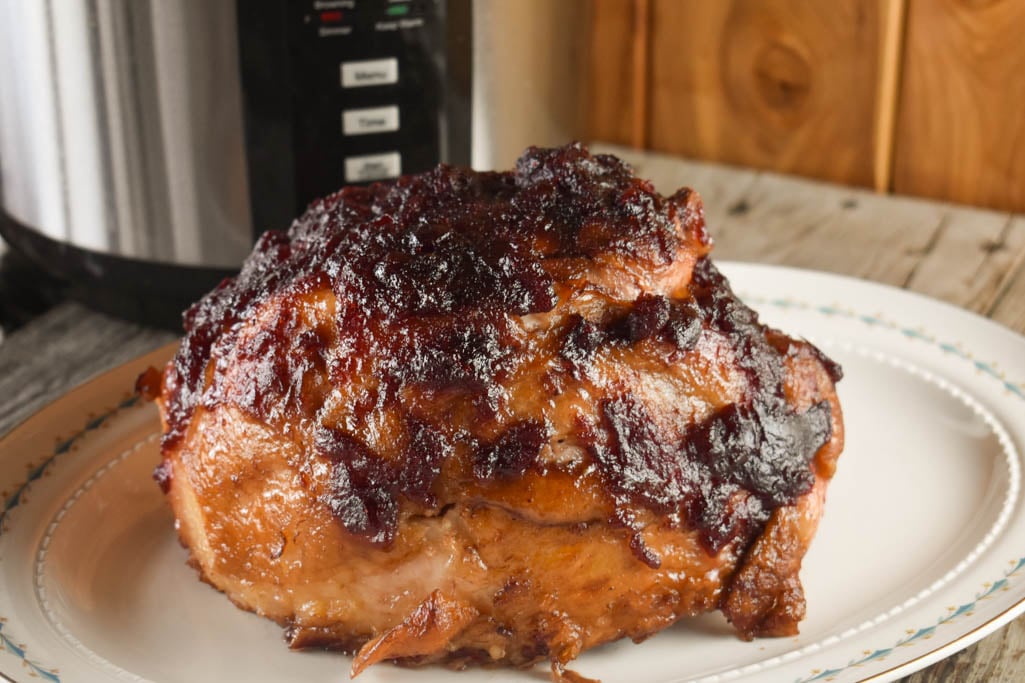 The best and worst thing about hams is how big they are and how many people they feed.  For smaller families, making a large ham doesn’t make sense. In this instance, we recommend buying and preparing a ham steak instead.

What is a ham steak?

A ham steak is an individual, thick slice of a larger ham. It can be prepared in one intact piece (like a steak), or cut it up and add it to your favorite casserole. Ham steak is great on the grill but don’t be afraid to cook in on the stovetop or under the broiler in the oven. 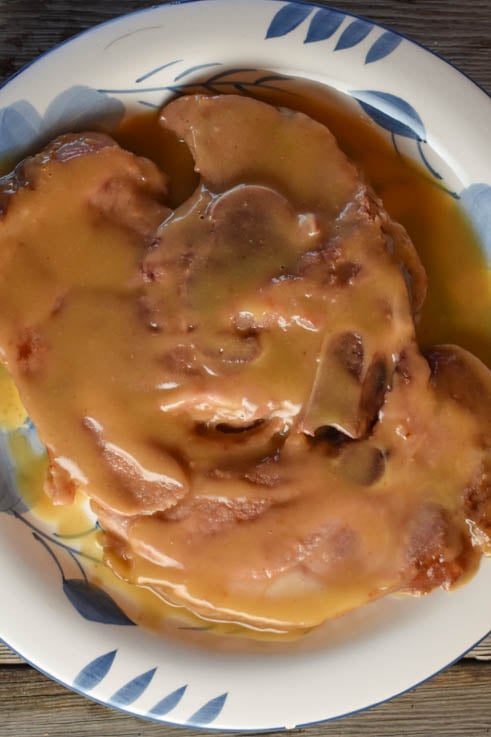 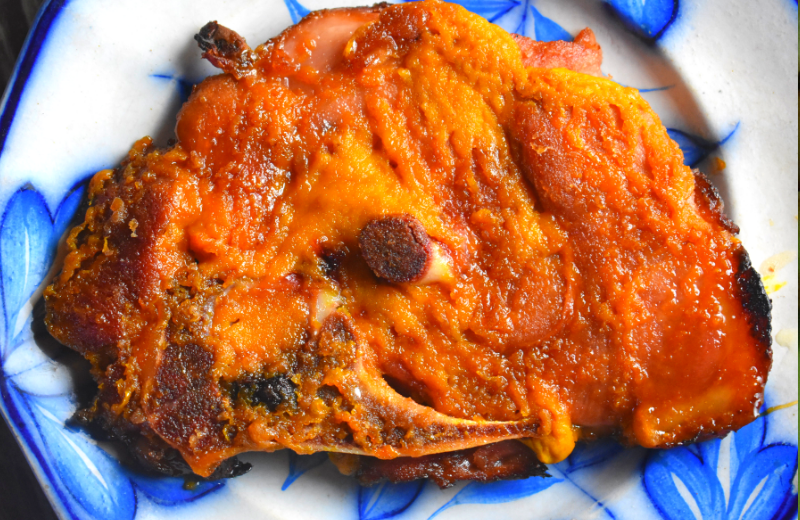 An easy way to use leftover ham is to chop it up in small pieces and add it to your favorite casserole. Casseroles are a favorite at our house especially during the winter. They are warm and hearty and they feed a crowd.

Mom’s Cheesy Ham and Potato Casserole is hands down the one “must make” dish when our family has leftover ham. This easy casserole was a staple of our childhood and is still a favorite today. 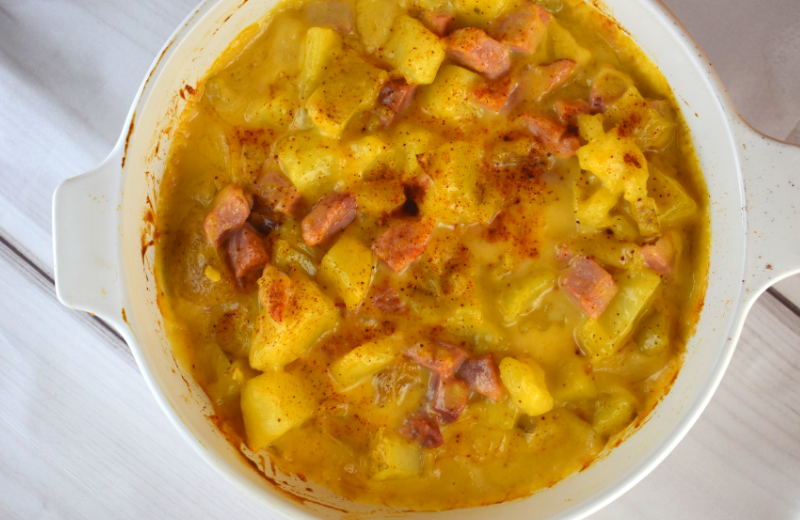 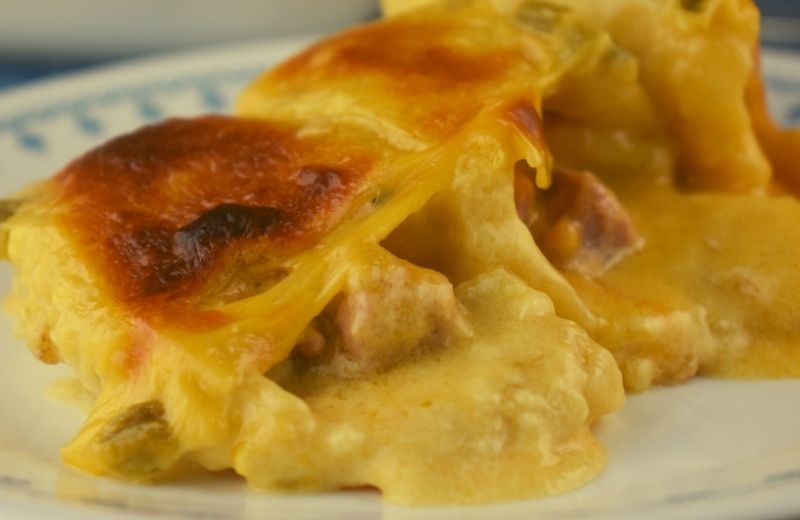 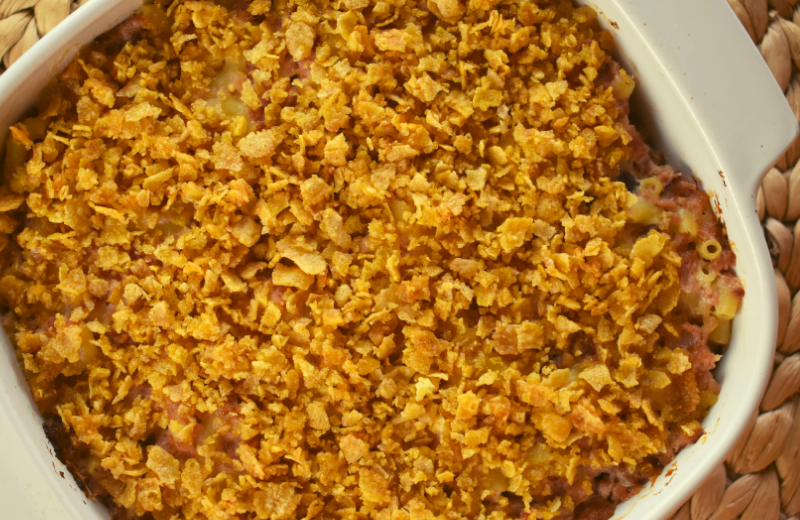 Another option for leftover holiday ham is to chop it up into bite-sized pieces and use it in your favorite soup recipes.  A great thing about soups are many of them can be made in less than 30 minutes on your stovetop, so they are great weeknight dinner options. 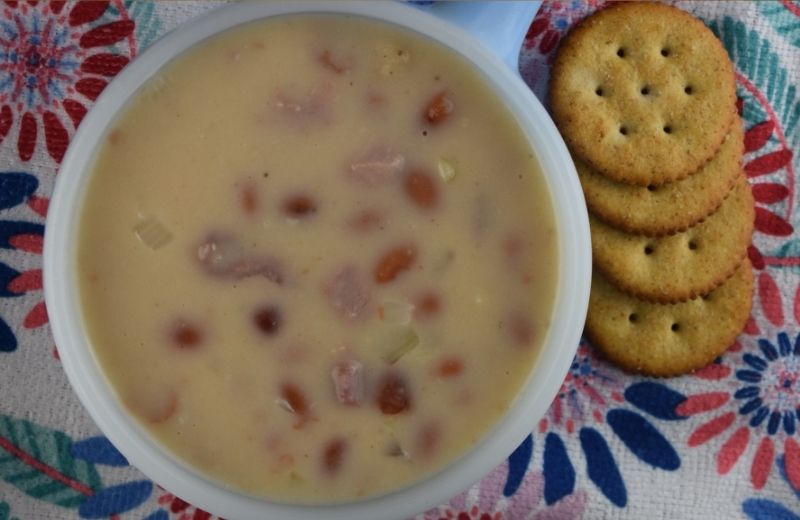 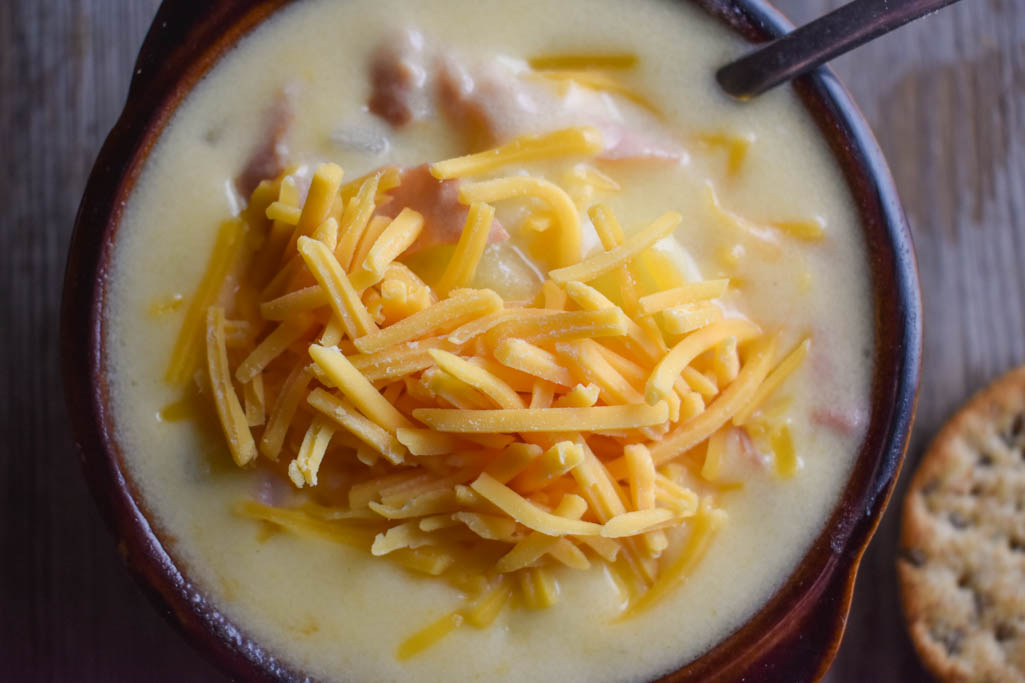 Shortcut Ham and Beans with Randall Beans is a quick version of classic ham and bean soup.  Using Randall Beans will save you much needed time and energy. 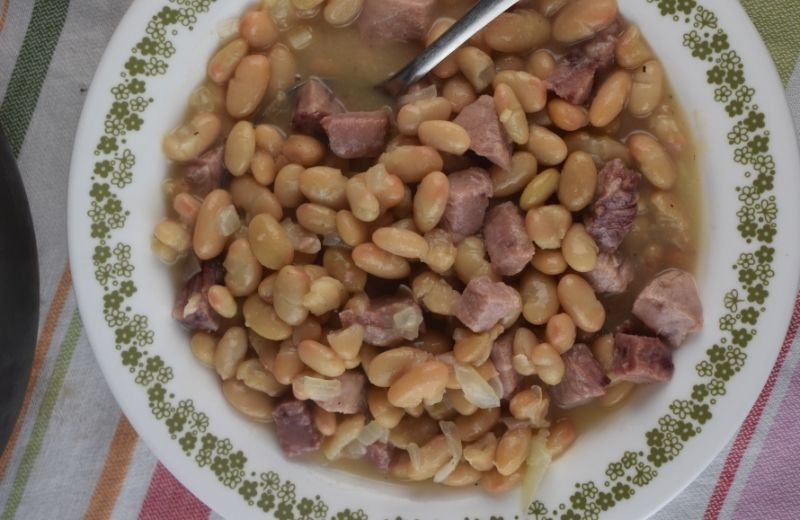 You could also save the ham bone to make ham broth, or use it in old fashioned Ham and Beans. 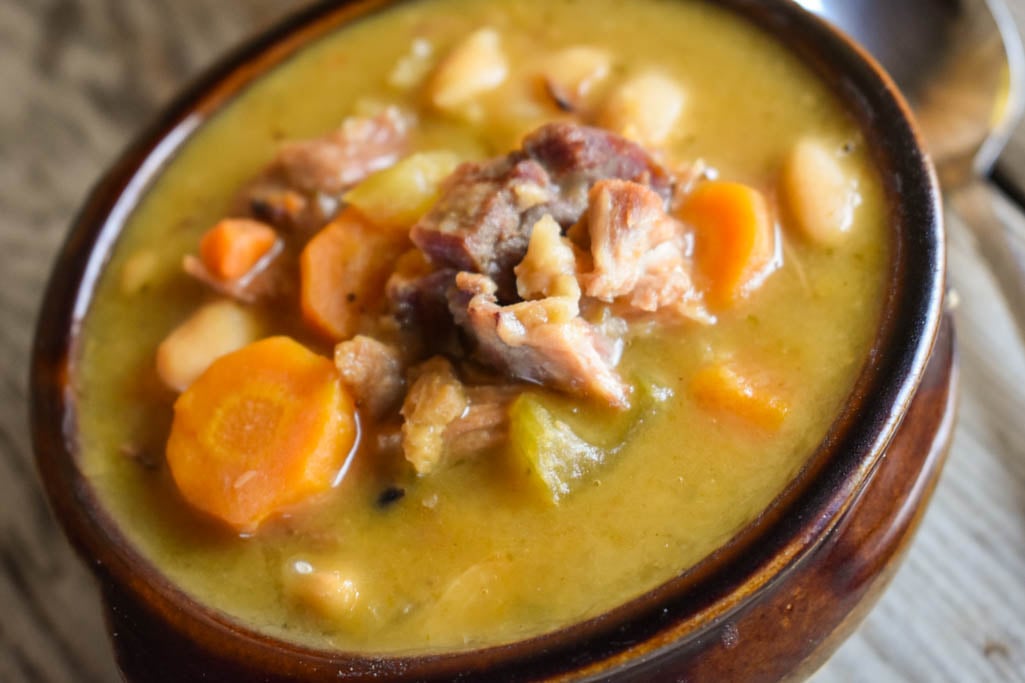 Grinding ham for recipes is a very old-fashioned method of using cooked ham. To easily grind up cooked ham, use a food processor and pulse until ground. 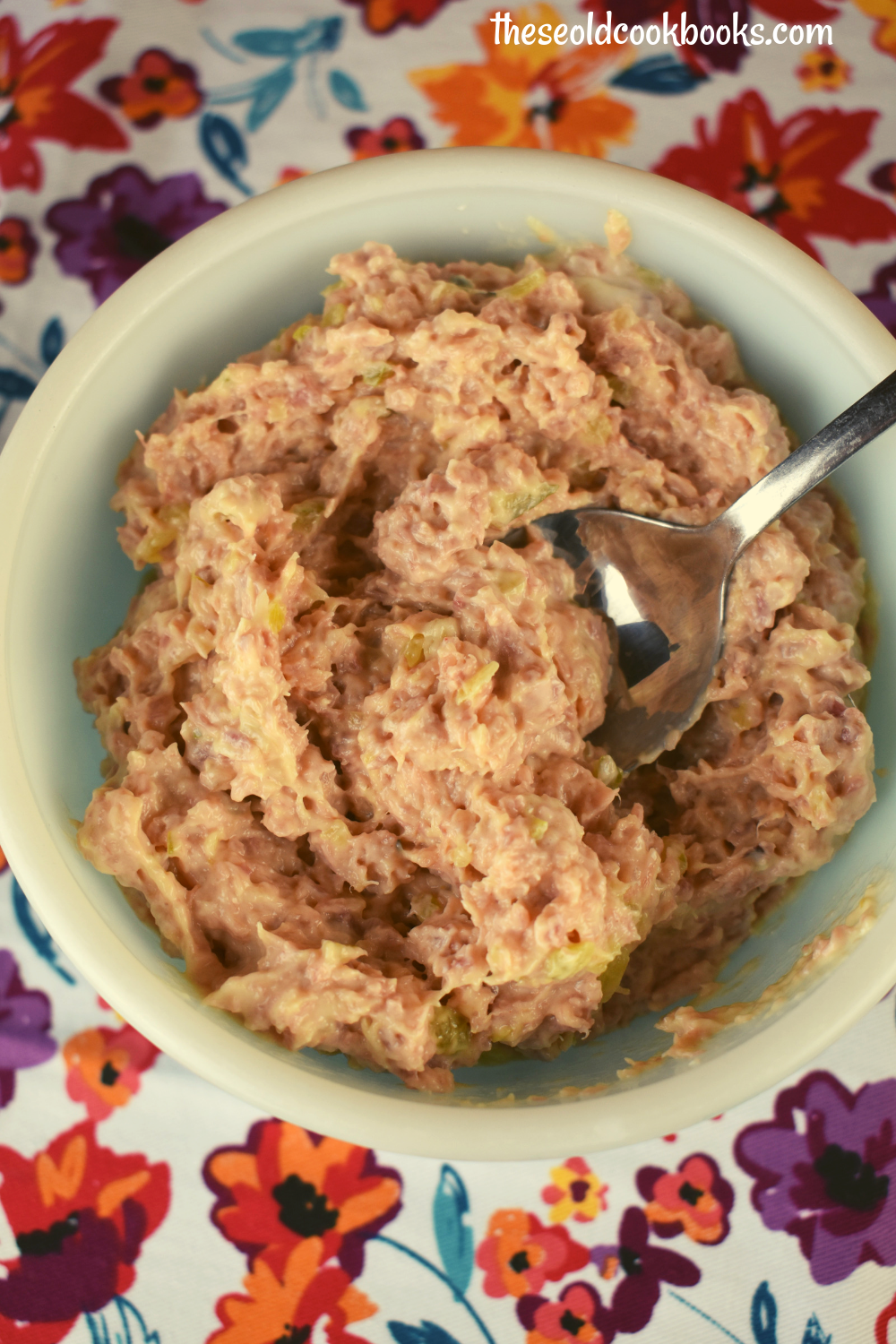 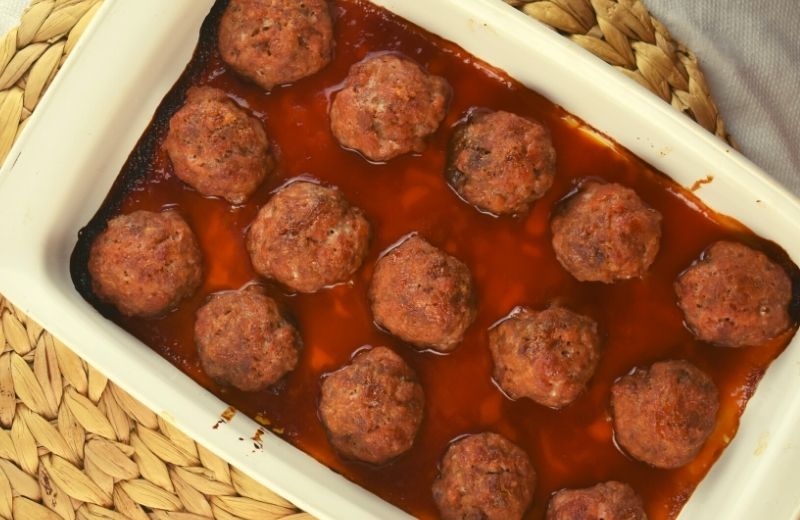 Don’t forget about breakfast or brunch when trying to use up all that leftover cooked ham.  Diced ham is the perfecting ingredient to pair with eggs or to include in breakfast casseroles.  Try adding diced ham to scrambled eggs or omelets for a tasty breakfast option. 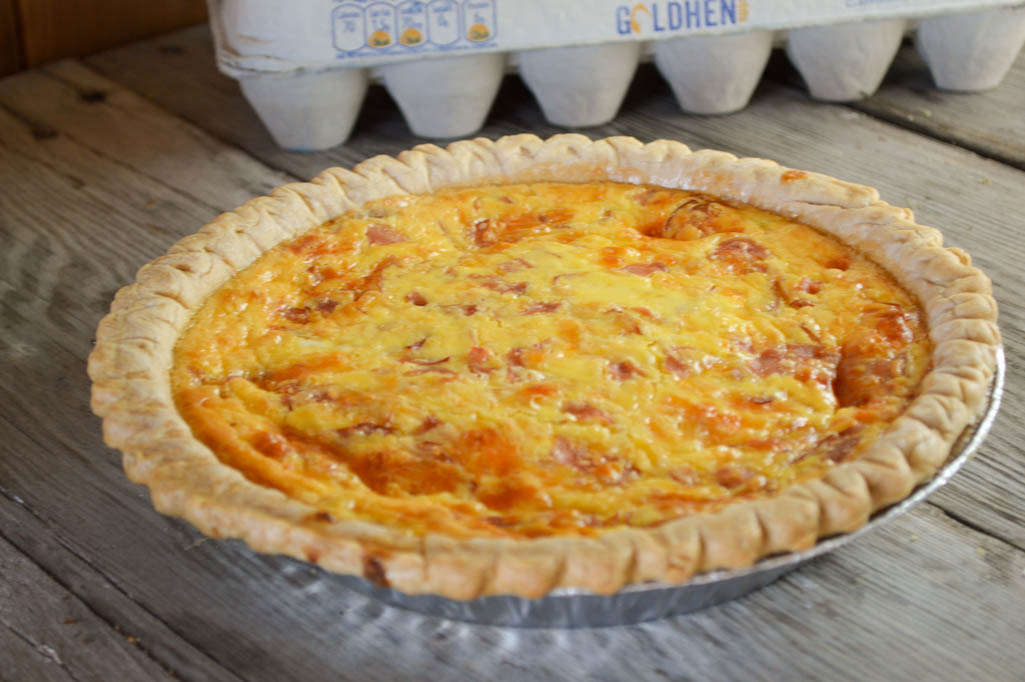 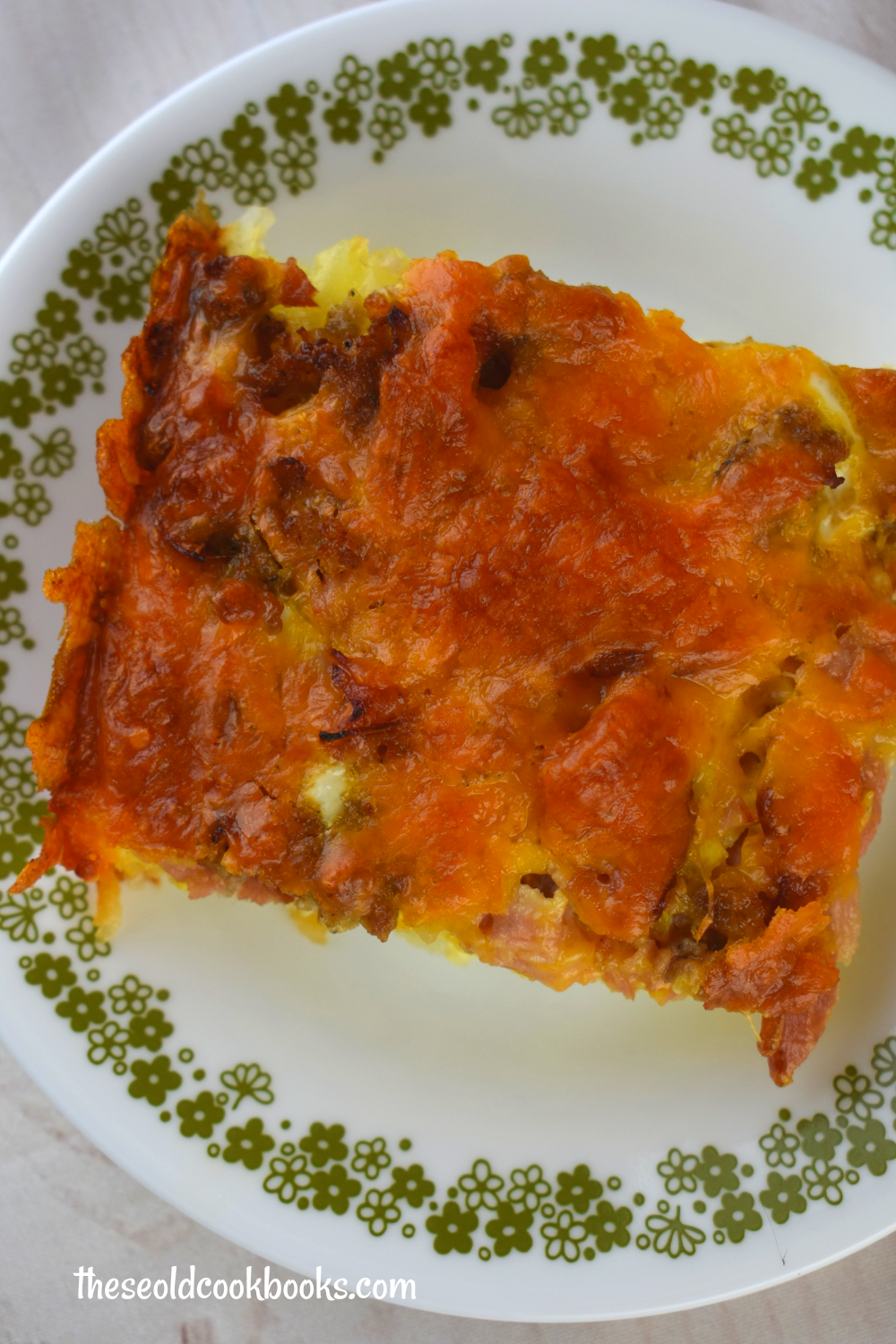 Helpful Ham Tips For the Holidays: 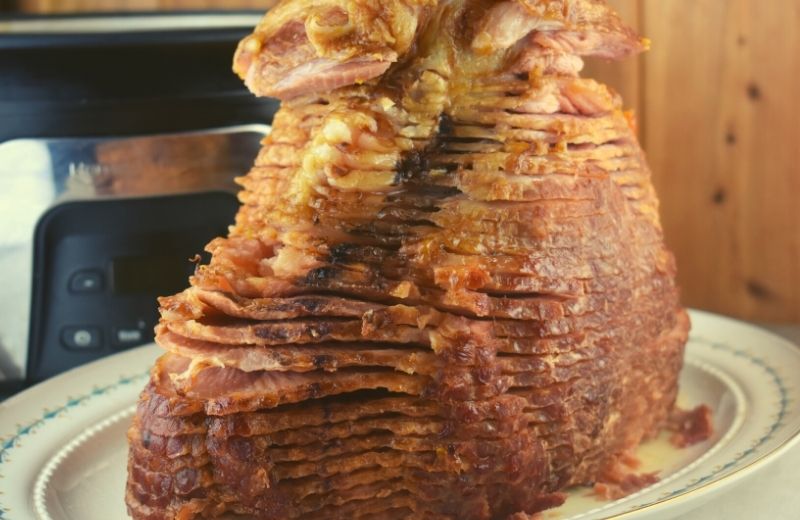 What is a spiral ham?

A spiral ham is one that has been cut at the processing plant with a machine.  The machine gives perfect, uniform slices making it easy to serve without a lot of cutting by hand.

Most hams are precooked during the curing process.  Be sure to read the label carefully to see if your ham is cured or uncured. Hams that are pre-cooked just need to be re-heated and glazed, if desired.

What is a ham glaze?

A glaze is sweet coating added to a ham during the cooking process. Ham glazes are typically sweet in nature to balance the natural saltiness of a ham. 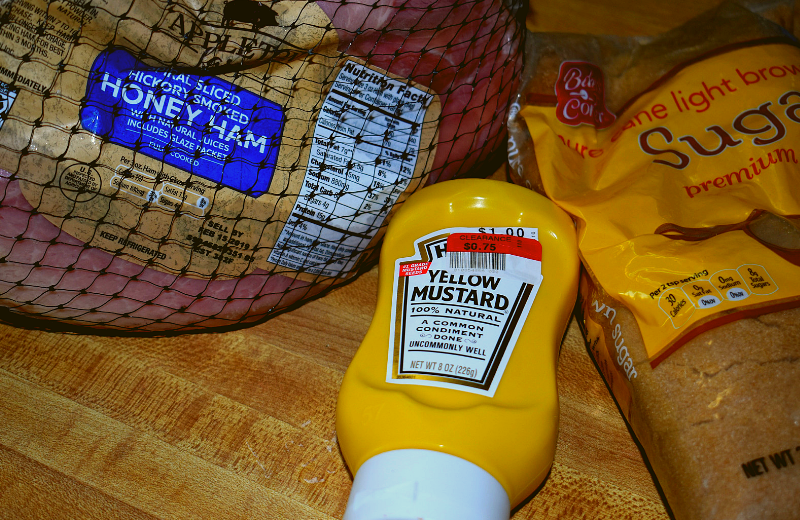 What are the best ham glaze ingredients?

When thinking about what makes a good ham glaze, you usually want something sweet to balance the salt in the ham but adding some spice to the glaze is also a great idea.

Can I freeze leftover ham?

Yes, freezing ham is a great option so you can take advantage of these leftover ham recipes later. Remove the bone, store in air-tight freezer containers or resealable plastic bags. Store in the freezer for up to 3 months.  To save time, dice the ham into bite-sized pieces to make casserole preparation easy.

What do I do with a ham bone?

Don’t toss that ham bone! Boil the ham bone in water with your favorite vegetables (carrots, celery, onions or leeks) to make a rich ham broth to use in soups.  In addition, the most popular way to use a ham bone is to make ham and beans, a traditional old-fashioned recipe.  Try our updated Instant Pot Ham and Beans version. 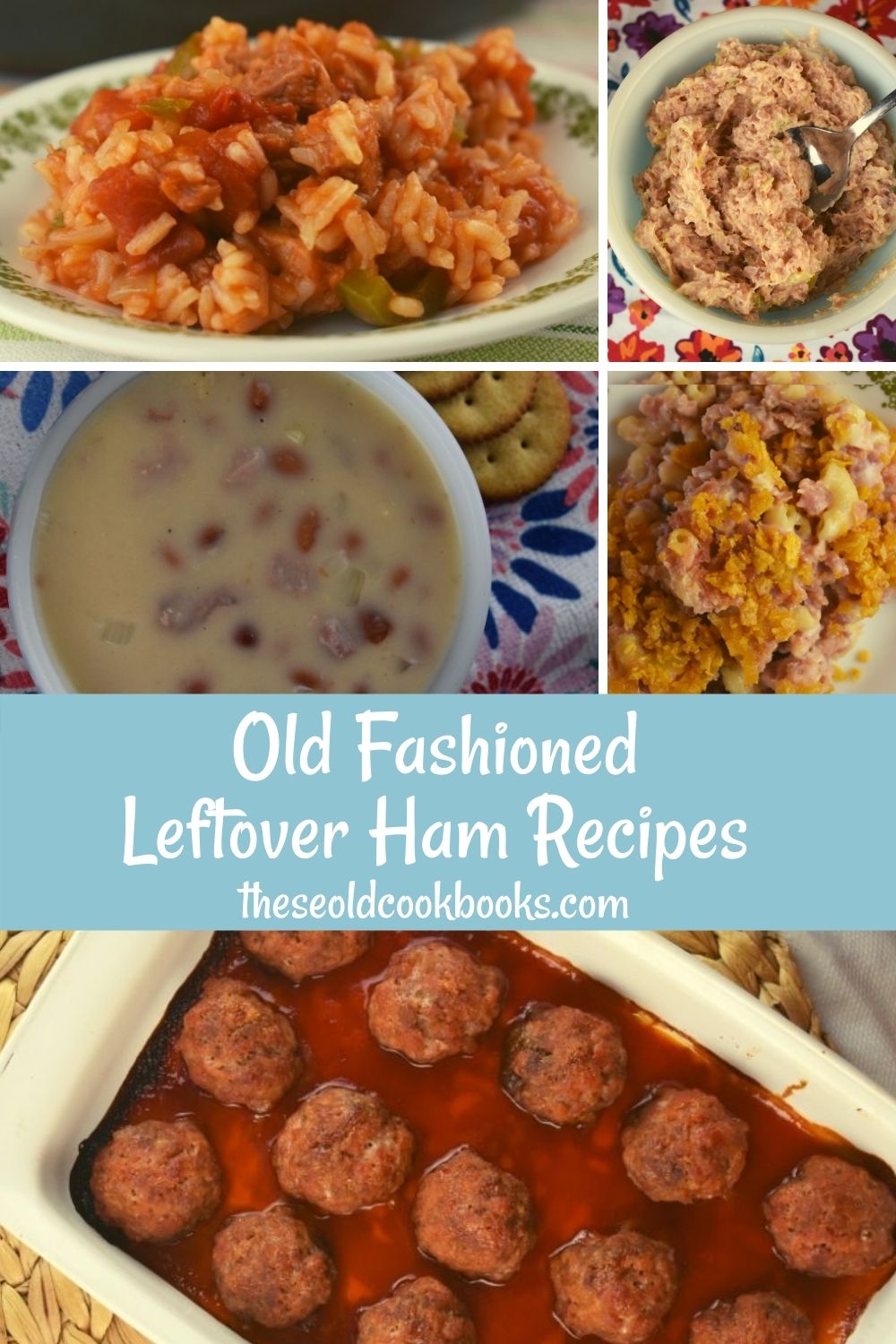 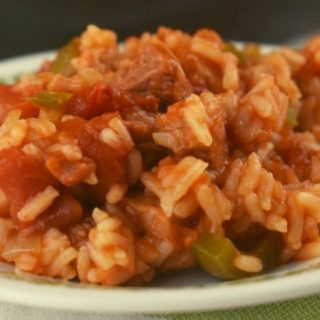 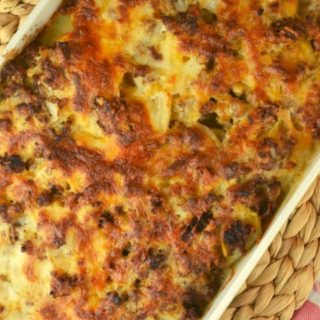